You are here: Home / Archives for Happenings 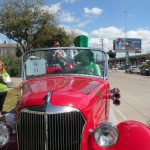 A great parade where the viewer’s dress in Irish green and cheer on the participants. The weather was in the 70’s with a strong wind which made the day bearable.  We followed a group of colorfully dressed Irish dancers who gave out Irish beads to the crowd.  They could literally kick their heels together while dancing  next to the trucks.

The Houston Fire Museums 1937 Chevrolet Fire Truck I ride in made it thru the parade like a pro.  Fellow Houston Fire Museum members Cheryl and Jim McGee followed us in their newer 1955 Firetruck just in case it did break down.  We ran into old friends Michael Horan and Michael Griffin the founder of Griff’s Sports Bar.   The highlight of our day was when we were able to convince Mayor Parker she needed her picture taken with Kathryn Peters and Tanya White by the Fire Truck. 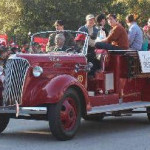 Life is a parade. You can either be a part of the parade or it passes you by. To lead the parade even if it is just once is what life is about. I have had the opportunity to be at the front of the parade, riding with Kathryn Peters in the front seat of The Houston Fire Museum’s 1937 Fire Chevrolet Truck with the wind blowing my hair and the police in front leading the way.
There is a difference when you lead the parade. You see everything in front of you but you don’t see the acts in back of you. Life is something like this. You have to look ahead and see where you are going. But you don’t look back to the past. You put a smile on your face and wave to the people. Each day when you get up in the morning you are leading your parade. Put a smile on your face and go forward embracing the opportunity ahead of you.
The leader of the parade always finishes first. The only thing that can happen to you is that you break down along the parade route. With our Fire Truck we are always followed by a newer Fire Truck which has a tow rope, so that if we break down they will be there to assist us. Life is like this in that you have God, family, and your friends to help you when you fall.
You cannot enjoy the parade thinking about what happens if the truck breads down. In the Rodeo parade our truck broke down 4 times before the Parade even started. Officials asked us to move aside if we had not fixed our problem. We changed the truck idle to about 4 times faster than necessary because the engine died every time we stopped. Then we sat back and enjoyed the parade. We did not worry that the truck might not make it or that we were out front and everyone would be making fun of the old truck which broke down. We did not slump back in the seat and hope for the best. We put a smile on our faces and went confidently about our business, the same thing you have to do every day of your life.
Don’t let the parade pass you by. No matter what your problems are there is someone with a whole lot worse problem. Smile and wave to the people as you move on with your life. 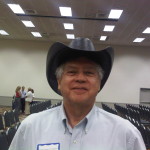 As a founding member of the Wine Committee I can tell you that I have never been prouder of anything I have done.  I saw a small group of people literally change people’s perception of what the Rodeo should be.  The older Rodeo Board of Director Members such as Lewis Pearce who believed in the vision of the wine committee and gave the green light are to be forever congratulated  I only wish that my father a longtime rodeo volunteer could have been around to see the success of the wine committee.  I know he would have been proud of all the committee who worked so hard to make this an important part of the Houston Livestock show and Rodeo.  We went from being called winos to connoisseurs

I don’t think anybody realized how much money we could raise for the rodeo when we started.  Visionaries such as Bear Dalton, Scott Hilsher, Carol Sawyer, Jim Janke, Rachel Melcher, Laura Rosenberger, Howard Hoover, Stephanie Baird and countless others convinced the Houston Livestock Show that wine was an agricultural product and belonged in the rodeo.  My fondest memories are of all of us working together doing everything to make the event happen.  In the beginning there were 300 are so of us brave souls who committed to putting together an event the people of the city of Houston would be proud of.  The original committee was composed of half wine drinkers and half long time rodeo volunteers.  Our goal was to help the Rodeo with its scholarship fund.

When you think of the logistics and organization that went into putting the event together it is mind boggling.  The wine companies through their wonderful representatives such as Arnold Gilberg, James Hilliard, Billy Davis, Sam Ray, Ned Thorn, Rick Jamail, and Bear Dalton contributed over 1,700 different wines.   These wines had to be categorized into flights of similar wines and poured by committee members into 5 tastings glasses.  Judges such as Mike Lonsford, Kyle Britt, and 65 others would taste the wines and rate them.    During the 2 days of the Wine Competition 17,000 glasses of wine were poured.  This means that each of those glasses had to be washed, polished, and cleaned without using soap.

My most memorable night was probably the first night the wine garden opened.  We had two tents located near the stadium entrance where wine by the glass was being sold.   It was one of those typical rodeo nights, insanely cold with a driving rain.  Our tents were located in an area where the Stadium literally caused a wind tunnel to take place.  One hour after we started the wind picked up one of the tents and literally blew it away.    Bear was scared to death that our remaining tent would fly away so all the flaps to the tent were open.  Of course, Bear left for some place warm and we were left to literally freeze death.  I looked over at Callie Patton who was turning blue and made a game changing decision.  I got on a chair and closed everyone one of those tents flaps.  We had maybe one customer but we all survived the night.

Next time you are at the Rodeo stop visit the Wine Garden and have a glass of our award winning wines.  And remember “A day without wine is like a day without sunshine.”