You are here: Home / Archives for Connoisseur 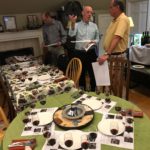 Years ago, I started a Monday night wine tasting for wine affectionados at a restaurant my family owned.   This group lasted 15 years until I became a father and had to quit.    Now that both kids are over 21 I decided to restart doing wine tastings.   The tastings will be structured with a theme and multiple wine glasses and wines.    The wine tasting events will be a casual get together every 3 months.    Where 10 to 14 wine lovers would drink wine, enjoy side dishes, cheese, and learn about wine.   The wine tastings will be on a Friday or Saturday night starting at 7:00PM.

The food plan consists of a main dish and side dishes brought by guests.   There is a reception of 30 to 45 minutes for guests to visit and mingle.   The appertif wine is typically alight bodied red wine, rose, or sparkling wine.    Most wines will be from my cellar though on occasion guests may contribute a bottle.

There will be tasting sheets for everyone at all events.   The event will start with a discussion about the wines we are going to taste.   The wine be poured in small portion of 1.5 to 2 ounces depending upon the number of wines to taste.   We will drink the wines, have our conversation and then finish with the remainders from each bottle.  Once we have tasted the wines, the group will vote for their favorite  wines.

Members are encouraged to do basic research on the wines.   This is a great way to start your wine adventure.  Some types of tastings we do are:

Messina Hof is a special place for me.  It is located next to my Uncle Cliff’s ranch where one of my earliest memories is hooking a catfish in the pond.  I don’t remember who won out but I do remember being afraid of being pulled into the water by the catfish.    I cannot tell you how surprised I was to find out someone was planting vines next to the ranch.   My first thought was this is insane.   The area had kind of a hill, a small pond and only a few trees.  I mention the trees only because the first building at Messina Hof was a white trailer with no AC.  When one needed to use the bathroom it was die in the heat box or hike to the trees.  Somehow Paul and his lovely wife Merrill survived.  As he used to say don’t give up the day job when asked about going into the wine business.

In the early days of Messina Hof , Paul was a brave soul and willing to partner with myself and Gaye Platt the leader of the Knights Of the Vine.   We all shared a common bond of being slightly insane.

Students wearing shorts (please no nudity) will have the opportunity to take this higher level course.  They will be divided into the following categories based upon ability.

We did this for 3 years in a row.  We left from Houston around 9am on buses and returned to Houston about 5pm.  One year we had two buses and one broke down.  After waiting in the hot Texas sun near Navesota for an hour.  The bus driver took pity on us and we all climbed into one bus.  I am not kidding when I say the bus sank down so far we were 4 inches for the ground.  Nobody could move, but we could drink.  Anybody who bought wine at the winery offered their wine as a sacrifice.  We started the wine bottles at the front of the bus and passed them backward.  Needless to say everyone in the front the bus was stumbling drunk and the everyone in the back was pretty sober.

I had the opportunity to revisit Messina Hof this summer.  It has changed so much from those early days that I thought I was at Robert Mondavi Winery.   It is one beautiful operation now, and Paul and Merrill Bonarrigo deserve all the success they have.  Paul promised he would always keep that white trailer to remind him of the old days.  But alas it has disappeared, as has the idea of putting a shrimp boat in the pond and selling dinner on the boat.

La Cruz de Comal Winery is located in the beautiful hill country of New Braunfels. This Texas Hill Country winery has a special significance to me. The winery is owned by good friend Lewis Dickson, and my son Gordon worked there one summer. Lewis is one of a kind, a true renaissance man. He picked out a beautiful piece of land near New Braunfels to locate his winery. He had craftsmen build custom log and stone buildings for the winery. All of the logs were made from trees located on the ranch. Lewis wanted the winery to reflect our Texas heritage. The bathroom is even located in an outhouse near the home.

As a winemaker Lewis is responsible for creating some of Texas finest wines. He has the help of legendary winemaker Tony Coturri of Coturri Wines. Tony is known as one of the first winemakers to use natural winemaking in California. Together this duo is producing wines under two labels. The Dickson label is used for wines made using grapes from the ranch; the La Cruz de Comal label is used for wines made from purchased grapes.

The pictures were taken after volunteer pickers finished for the day.  The La Cruz de Comal  grape pickers are an eclectic mix of Texas individuals.  You have high profile attorneys, story tellers, photographers, artists, architects, winemakers, real estate broker (myself), and just plain characters working in the Texas heat for their good friend Lewis.  A good time was had by all.